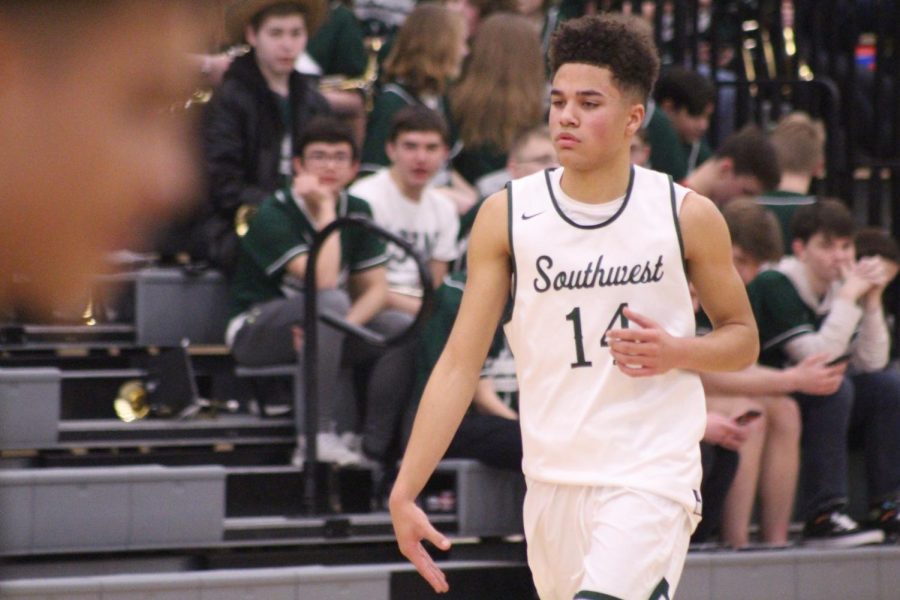 LSW varsity boys basketball fell to Omaha South 39-59 at Lincoln Southwest High School on Saturday, Feb. 1. Despite this, Southwest freshman guard, Rylan Smith, led the Silver Hawks with 8 points and 3 rebounds and had a stand out game against the number three ranked team in the state.

When a boys varsity basketball team only has three seniors, at times underclassmen are asked to step up. However, generally, that player is not a freshman. Despite this, freshman guard, Rylan Smith, took command in LSW’s Hoops 59-39 loss against the defending Class A State Champions, Omaha South, on Saturday, Feb. 1.

The 6” 1’ 160 lbs. Smith cashed in 8 points and 3 rebounds to lead the Hawks in the match up against the Omaha South Packers.

“The way the team has played the last three games now has given me a lot of confidence,” said Smith when speaking of what led to his play on Saturday night. “We have shown a lot of big strides in practice.”

Throughout the game, Smith was calm and composed against Omaha South’s notoriously scrappy full court press, and, at the same time, aggressive in getting to his spots by using tight and quick dribble moves to score from all areas of the floor.

“My teammates are always there helping me out… I can’t do it by myself,” said Smith when talking about handling Omaha South’s pressure. “Just going to the gym day after day and getting reps in too [helped get the skills needed for Smith to combat the Packers defense].”

This is not the first time the freshman guard has had a big impact on a Class A boys varsity basketball game (a rarity seen in Nebraska high school hoops).

On December 27, 2020, Smith pitched in 14 points in a 81-55 win over Fremont and has had several other games where he has made an impact on the floor.

However, despite Smith’s performance, the Hawks did lose the game after giving the number three ranked team in the state a scare the first three quarters. LSW led going into halftime 23-21 and was only down 35-41 going into the fourth quarter.

But, yet again, Southwest lost due to a characteristic that has hurt the team all season: consistency. The Hawks have routinely played three quarters of basketball where the team is able to hang with some of the top teams in the state, like Omaha South. Although, one quarter LSW will let the other team go on a run and are unable to respond. This occurred again Saturday night against the Packers.

The next outing for the 6-12 Hawks will be a quick turnaround against 8-7 Omaha Burke on Tuesday, Feb. 4, at Lincoln Southwest High School with tip off at 7:30 p.m. The Burke Bulldogs will be coming off a 71-55 win against Lincoln High on Saturday. Feb. 1.